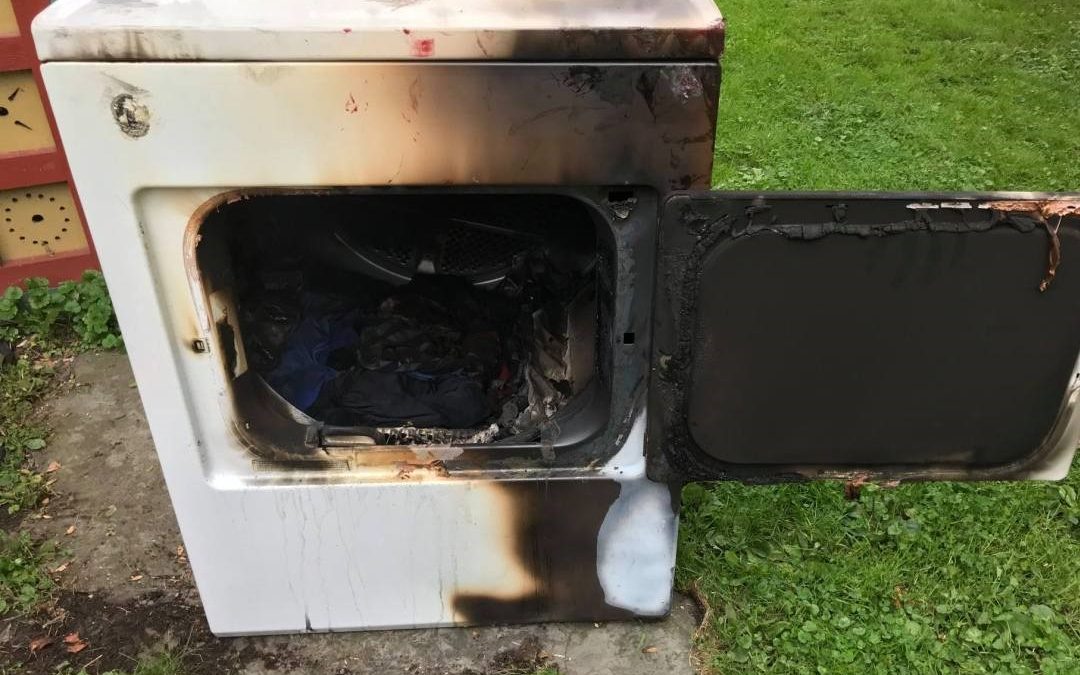 Have you got a clothes dryer? Read on!

A friend of money came over to me this morning after our Monday morning prayer meeting (y’all are invited-call me for details). He said, “I noticed that our dryer was taking a really long time with the clothes and that the interior was super-hot. So, I remembered something that I had read and decided to check my dryer vent. Much to my horror it was packed-not filled but packed with lint. Another name for lint could be ‘fire starter’. The lint is so dry that it is ready to burst into flame.

The same thing happened to your trusty home inspector about six months ago- I think it is time to check again…It is estimated that 15,000 thousand fires are caused by problems with clothes dryer vents EVERY YEAR! Out of that 15,000 an average of 13 people are killed by smoke or simply burned up. Who woulda thunk it?

When you think about the whole issue vent fires seem like a no brainer. Your dyer created super dry lint which is then ignited by the heat of the electric coils or the gas burner depending on your dryer type. Sometimes the fire develops right at the lint screen which is readily accessible at the front of your dryer (Have you checked it lately). But most fires are caused by clogged up vent pipes and terminations.

The big issue of vent pipes is how they clog up. The longer they are then the more they clog. The other issue is how smooth the interior is. Dryer vent pipes must NOT be connected using screws to hold the parts together. The sharp protruding ends of the screws snag the lint as it is traveling through the pipe causing it to get blocked up.

Tight corners with flex duct will cause the same problem. The lint must get shot as straight as possible out the pipe and into the great outdoors. For this reason the code also says that no screens are permitted at the end of the dryer vent as the screening will capture the lint and cause a nice pancake of flammable fuzz to accumulate waiting for the spark!

Most dryer vents run directly through the outside wall or in the case of homes on slabs the vent may be a PVC pipe that runs under the slab and then exits at the surface. Sometimes the vent goes up the wall and out the roof.

This is really a bad idea (although code permits it) because even lint is subject to gravity and it will want to fall back down and accumulate at bends in the pipe. Also the vent cover at the roof line must be open and designed for the dryer. If you have a vent running up the wall then you need to check it a lot.

Here is what the building code says:

Flex ducts must be no more than eight feet long and must be in one section-no spliced together pieces. If your vent pipe is longer than 8 feet, then it must be made of metal or I often see PVC pipe used. Any sections that are connected must not use screws and the longest that is permitted is 25 feet. (I have seen 50 footers on many occasions).

The code also draws attention to the fact that any bends in the pipe must be gentle so as not to restrict the airflow. And finally, the end of the dryer vent must be designed for that purpose with a self-closing flap (to keep critters out). A good hint that there is trouble is that your dryer does not seem to be drying the clothes as quickly as before. If this is the case check for clogs!

Ned Dominick has been inspecting homes in Macon, Warner Robins, Byron, Forsyth, and all Middle Georgia since 1978. He and his qualified inspectors have examined over 30,000 local homes. If you have questions, check out Ned’s website at www.housetalk.net or give him a call at 478-738-0893.