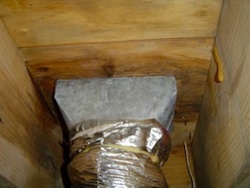 “Duct Boots!” the home owner gently shouted…” whoever heard of a duct boot?”

So, what’s a duct boot and who cares? Almost all of us have these neat rectangular shaped heating and air vents either in the ceiling or the floor. Why HVAC people decided to make the vents rectangular is a good question because the ductwork leading to them is tubular and round…

Whoa! I am putting you to sleep. Have you ever noticed that there are moisture stains around your ceiling vents? Sometimes you will see similar stains or even often soft flooring around the floor vents. This is because of duct boots…ahhh! – more interesting! So, back to the tubular round-shaped heating and air duct- in order to make the change from the cylindrical duct to a rectangular vent then there is a metal transitional piece called the duct boot and this critter has caused problems for years due to lazy HVAC installers (no names mentioned).

The problem is that the long lengths of HVAC ductwork typically comes with insulation already installed on it. This insulation does a couple of things: it helps with energy efficiency but most significantly it helps reduce sweating on the ductwork during these crazy high humidity days. So, put yourself in the place of a heating and air installer who is either working in a 150-degree attic or slogging around in a disgusting wet crawlspace.

The duct boots do not come with insulation on them. They are a pain in the neck to install in the first place and once they are installed it seems to be an intolerable idea to have to cut out small sections of duct insulation, crawl under the house or in the attic and wrap these critters with insulation. Not a small job since there are usually two in each main room and at least one in the bedrooms and baths…adds up quick…and so, what’s the big deal…forget it…no one will ever know!

It is a big deal because when you are running your air conditioning then these duct boots get nice and cold and the moisture in the super humid Georgia air then condenses all over them causing them to sweat-profusely! So, the beads of sweat drip down and land on your nice sheetrock ceiling causing a brown moisture stain and mildew on the grill of the vent. In the case of the floor vents, the sweat is wicked up into the nice dry subfloor which then is damp enough to host wood-decaying fungus (rot!).

This week we actually had to call out rotted floors in several locations in a very nice house due to the absence of insulation on duct boots. Should not have happened. I suspect that over 30% of houses we have inspected suffer from this issue. That would be over ten thousand Middle Georgia homes with uninsulated boots…Hmmm I think I will check mine!

Ned Dominick has been inspecting homes in Macon, Warner Robins, Byron, Forsyth, and all Middle Georgia since 1978. He and his qualified inspectors have examined over 30,000 local homes. If you have questions, check out Ned’s website at www.housetalk.net or give him a call at 478-738-0893.